Valtteri Bottas set the pace in the opening Formula 1 practice session for the Belgian Grand Prix, leading a 1-2 finish for Mercedes ahead of Lewis Hamilton.

After seeing Max Verstappen set the initial pace on Friday morning at the Circuit de Spa-Francorchamps on the medium tyre, Bottas jumped to the top of the standings after switching to the soft compound Pirellis.

Bottas recorded a fastest time of 1m44.493s to claim P1 in first practice and narrowly beat Hamilton, who set his lap just moments after his team-mate but fell 0.069 seconds short.

Verstappen was able to run both Mercedes drivers close after making a slightly later switch to soft tyres, but was 0.081 seconds shy of Bottas’ benchmark come the end of the session.

None of the leading three drivers opted for multiple attempts at the fastest time through a quiet opening practice at Spa that was not interrupted by a single stoppage or yellow flag.

Bottas suffered a front-left puncture during a race simulation run on the soft tyres late in the session, but was able to easily get back to the pits.

Perez lapped just 0.136s off Bottas’ leading time, with Stroll finishing a further two-tenths of a second behind.

Alexander Albon ended the session sixth for Red Bull, almost half a second down on team-mate Verstappen. 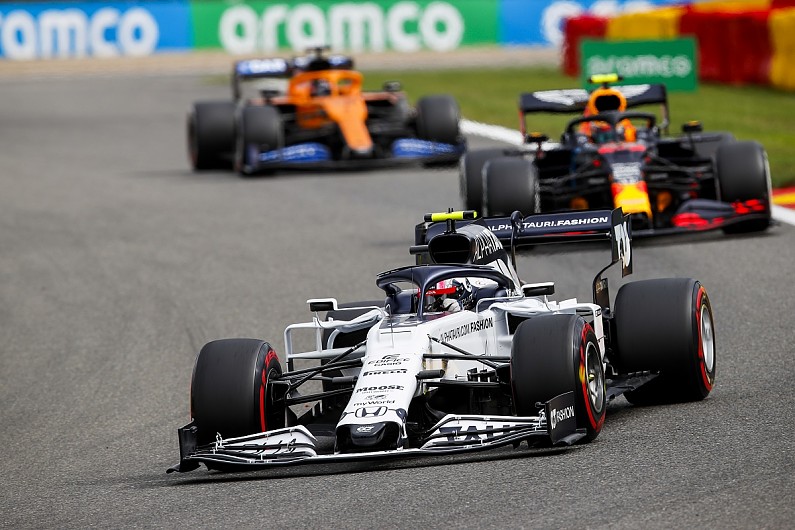 Esteban Ocon was the leading Renault in opening practice at Spa, finishing seventh as Daniel Ricciardo ended the session ninth overall, one-tenth of a second behind his team-mate.

The Renault drivers were split by McLaren’s Carlos Sainz Jr in eighth, while Lando Norris completed the top 10 in the sister McLaren MCL35.

Norris provoked an angry reaction from Pierre Gasly early in the session after the AlphaTauri driver felt he was held up by the McLaren at Stavelot, but the incident was not noted by the stewards.

Gasly finished the session 12th behind team-mate Daniil Kvyat, with both drivers setting their best times on the medium compound tyre.

Kimi Raikkonen took 13th for Alfa Romeo ahead of the Ferrari pair of Charles Leclerc and Sebastian Vettel, whose anticipated struggles on the straights left them well off the pace.

Last year’s Spa race winner Leclerc was 1.2s off Bottas’ time, while Vettel finished a further four-tenths of a second back.

Williams drivers Nicholas Latifi and George Russell finished 16th and 17th respectively, ahead of Kevin Magnussen, Romain Grosjean and Antonio Giovinazzi, all of whom failed to set a time.

Grosjean reported a loss of power on his Haas F1 car early in the session, with the team confirming it was set to change the Ferrari power unit as a result of the issue. Magnussen’s engine also had to be removed due to a similar problem.

Alfa Romeo said that Giovinazzi’s car had suffered a “technical issue”, limiting him to just two installation laps in FP1.